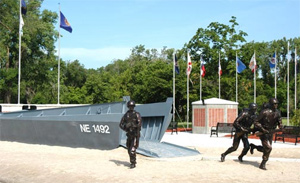 The Andrew Jackson Higgins Memorial in Columbus, NE is a tribute to the man that Dwight D. Eisenhower called “the man who won the war for us”.  Without the famous Higgins landing crafts (LCPs, LCPLs, LCVPs, LCMs) World War II would have been much different and winning the war much more difficult.

During the war, his company produced over 20,000 boats for the war effort, including the famous LCVP, more often called the Higgins boat. This landing craft participated in every major invasion of the war, including North Africa, Sicily, Italy, D-Day at Normandy, and the islands of the Pacific, including Guadalcanal, Tarawa, Saipan, Tinian, Iwo Jima, and Okinawa.

The Higgins Memorial began as a class research project for Columbus High School classes taught by Jerry Meyer. He and his students became so taken with the story of Higgins and the opportunity to honor a native son that a research project became a community memorial. Through the work of students and numerous partnerships with volunteers and businesses Columbus has created a memorial dedicated to Higgins and to all veterans.

The memorial includes a full-size replica of the famous Higgins Boat. Running from the boat are sculptures by internationally renowned artist Fred Hoppe, depicting a soldier from each of the three wars in which Higgins Boats served (World War II, the Korean, and Vietnam War). Around the boat are sand samples from landing beaches across the globe where Higgins Boats carried soldiers ashore. Brass stars hold these sand samples from D-Day beaches and are embedded in the concrete surrounding the “Higgins Boat”.  This memorial is the only known location in the world to allow visitors to walk on sad from D-Day landings of WWII, Korea and Vietnam.

The memorial also features five flags, the tallest honors U.S. POWs/MIAs. Flags of both Nebraska and Louisiana are displayed, representing the states where Mr. Higgins lived. Surrounding the Memorial are flags of the other 48 states and 7 U.S. territories. The American Legion, VFW, and six service flags representing the Army, Navy, Marines, Merchant Marines, Coast Guard, and the Air Force are also displayed.

The Memorial Wall, which measures 8 by 94 feet, is made of Wisconsin stone. It surrounds 1,000 donor bricks and along the platform are 10 benches honoring veterans, families, businesses, and other donors. Two additional octagonal structures housing 960 bricks were added in 2002. Still to be added is another curved wall featuring an additional 1000 engraved bricks.  The historical marker to the right of the Memorial displays a biography of Andrew Jackson Higgins. A bronze statue of Mr. Higgins was unveiled on August 16th by Dawn Higgins Murphy, daughter of Mr. Higgins.

After 9/11, the Memorial was expanded to honor those who lost their lives on that fateful day and those who continue the fight against terrorism. Perched on a 30-foot steel beam, a 400 pound bronze eagle symbolizing freedom, spreads his 7-foot wings as he circles the memorial. The eagle was sculpted by Fred Hoppe and is made from steel taken from the fallen World Trade Center towers. The steel, assembled along side the eagle, never touching the eagle’s 30 foot beam, symbolizes that terrorism will never touch our Freedom.

The Andrew Jackson Higgins Memorial stands as a tribute to a Columbus native son who changed history, to veterans of all eras who have served and sacrificed, and to the ongoing fight against terrorism.