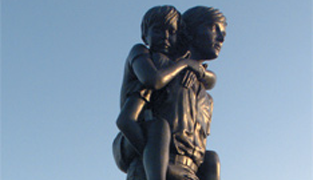 Boys Town is one of the great historical attractions in Nebraska; it’s a beacon of hope and optimism in the heart of the Midwest. In 1917, a young Irish
priest named Father Edward J. Flanagan was called to help boys in Omaha, Nebraska. In December 1917, Father Flanagan borrowed $90 to pay the rent on a boarding house that became Father Flanagan’s Home for Boys. Flanagan welcomed all boys who needed help, regardless of their race or religion. By the spring, 100 boys were living at the Home.

In 1921, Father Flanagan purchased Overlook Farm on the outskirts of Omaha and moved his Boys’ Home there. In time, the Home became known as the Village of Boys Town. By the 1930s, hundreds of boys lived at the Village, which grew to include a school, dormitories and administration buildings. The boys elected their own government, which included a mayor, council and commissioners. In 1936, the community became an official village in the state of Nebraska.

If you’d like to tour Boys Town there are several options: The standard tour, an interactive self-guided tour, and custom tours for groups.

The standard tour begins at the Visitors Center, where a step-on guide will greet you. From there, you will start a driving tour through the Village and see where the children of Boys Town live, play, work, go to school and pray.

The first stop is the Hall of History. Other attractions include Dowd Chapel and the Father Flanagan Shrine, Chambers Chapel, the Garden of the Bible, the historic Father Flanagan House, the Rose Garden, the Gift Shop and Leon Myers Stamp Center, both located in the Visitors Center. Depending on the time of day, you have the option of having breakfast or lunch at the cafe.

Attractions are free. For a guided tour the suggested donation is $3 per person

For the interactive tour of Boys Town you’ll need a smartphone with a QR code reader. This tour features ten attractions with QR codes nearby. Simply scan the code and you will instantly have access to facts, photos and videos featuring some of the most popular attractions. When you’ve completed the tour, you can stop by the Boys Town Gift Shop and you’ll receive a gift.