America’s Main Street, the Lincoln Highway was the first paved coast to coast roadway, spanning 3,380 miles through 13 states, connecting New York to San Francisco and all towns in between.

In 1915, the Lincoln Highway was a bold, innovative plan, mapped across the U.S., yet years from being fully paved. There were sections of dirt, sand and even pasture, marked only by posts, poles and hand-written signs; travel was a monumental undertaking.

But once the idea of traveling independently became a reality there was no holding America back. The freedom of the open road was intoxicating and for five decades, before the development of the Interstate system, the Lincoln Highway was indeed America’s very busy Main Street, with Nebraska right in the center.

Today, the Nebraska Lincoln Highway Historic Byway lets you glimpse into the past and relive some of the adventure of this significant era, when a roadway first linked America from coast to coast and Nebraska from border to border. It’s time to rediscover the open road and enjoy the Lincoln Highway.

On September 13, 1913 after completing the “Trail Blazer” exploratory trip from Boston to San Francisco, the Lincoln Highway Association announced this proclamation:

Whereas, the purpose of this association is to immediately promote and procure the establishment of a continuous improved highway from the Atlantic to the Pacific, open to lawful traffic of all descriptions and without toll charges, and Whereas, toward the end of accomplishing this purpose elaborate research and investigation has been prerequisite to crystallization of opinion before intelligent and wise decision could be reached and

Whereas, this association expressly desires to impress upon all the people that it fully acknowledges that a public declaration of it of a route is of no force or effect except as it shall be wise and practicable, and being so meet with the approval of the people for such a useful and enduring memorial and

Whereas it is obvious that this association can only aid and co-operate toward the desired end, and that UPON ALL THE PEOPLE and expecially upon the officials of each state and county and upon the inhabitants thereof, within the borders of which is designated by these resolutions a section of the Lincoln highway, does rest the patriotic burden of establishing, broadening, straightening, maintaining and beautifying such highway to the end that it may become an appropriate memorial to the great martyred patriot whose name it bears, and

Whereas, our chief step toward the desired goal is to crystallize in the public mind the practical wisdom of the route selected, therefore be it recorded here:

First–That in general it has been for nearly a century and is today the main overland trail, and that part lying west of Chicago is known by that historic name.

Second–It is the most direct and practical route as to grades, curves and general topography.

Third–It is to the greatest extent improved and marked throughout its length.

Fourth–It is capable of being established as a fitting memorial highway at the least cost, and

Whereas, It is now proper to declare the results of deliberation and inspection in the hope that the wisdom and care in selection may insure united sentiment, and with the prayer that this record will appeal to the hearts of all patriotic Americans to the end that plans and activities toward construction may go immediately forward, therefore be it Resolved, That the Lincoln highway now is and henceforth shall be an existing memorial in tribute to the immortal Abraham Lincoln. 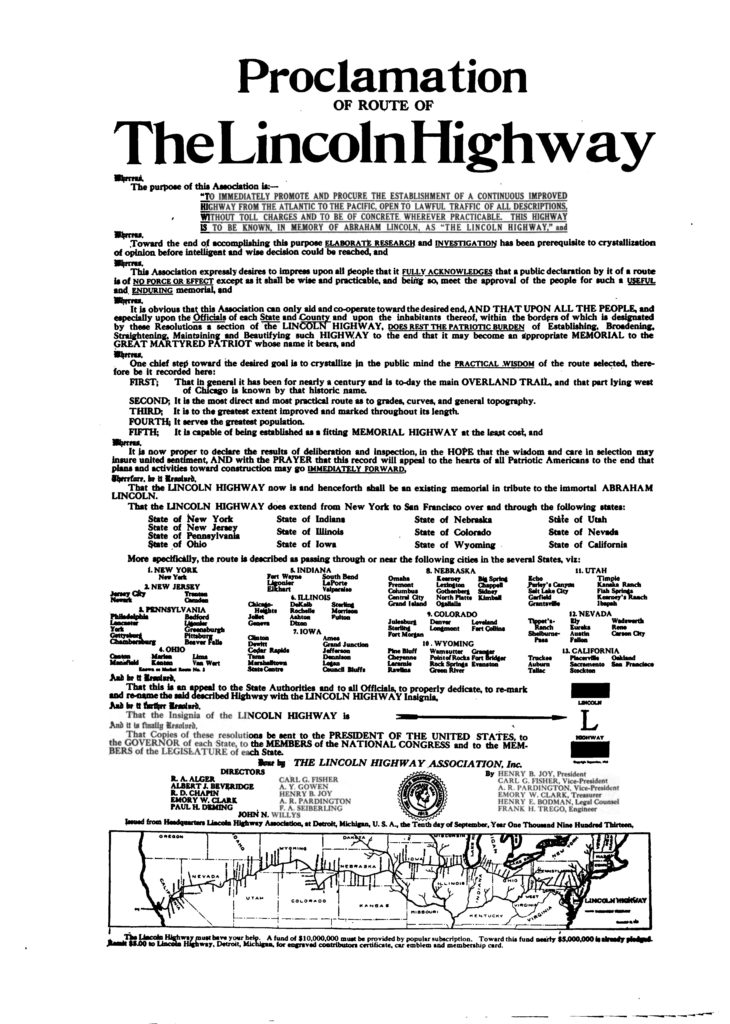 That the Lincoln highway does extend from New York to San Francisco over and through the following states:

More specifically the route is described as passing through or near the following cities in the several states, viz:

And be it resolved, That this is an appeal to the state authorities and to all officials to properly dedicate, to re-mark and re-name the said described highway with the Lincoln highway insignia and be it fully Resolved, that copies of these resolutions be sent to the president of the United States, to the governors of each state and territory, to the members of the national congress and to the members of the legislatures of each state.